The 1911 pistol is often cited as being one of the finest and most respected service handguns of all time. A revolutionary pistol when first released, it remains immensely popular in the United States today and is still seeing limited service in the military, having previously served as the main sidearm of the military from 1911 to 1985.

Origin and Evolution of the 1911 The 1911 was designed by John Moses Browning to be a military service sidearm from the start. In the Philippine-American War, American soldiers were issued the Colt M1892 revolver in .38 Long Colt as their sidearm, but the handgun was too weak to bring down enemy fighters even after multiple shots.

As a result, the government was forced to reissue the older Colt Single Action Army (SAA) in .45 Long Colt, which had superior stopping power. By the turn of the century, the single action SAA with its slow reloading mechanism was outdated, and the world was switching to semi-automatic pistols with detachable box magazines. As a result, the United States Government began searching for a semi-automatic pistol in .45 caliber to issue its troops. Numerous firearm designs were submitted, but the one that emerged on top was Colt’s entry: the Model 1911 in the .45 ACP round, as designed by John Browning.

During the endurance tests, six thousand rounds were fired out of each pistol almost non-stop over two consecutive days. The Colt M1911 was the only pistol that had absolutely zero failures.

The M1911 was used as the standard American military sidearm from 1911 to 1985, and saw extensive service in World War I, World War II, the Korean War, and the Vietnam War, and has continued to see use in conflicts since then. In the 1920s, the M1911 was updated to the M1911A1, which featured a shortened trigger and arched mainspring housing.

The basic M1911 design has had very little fundamental change in its production life. It’s a single action only, recoil operated pistol where the expanded gases from the fired bullet gives momentum to the slide and barrel to travel a short distance rearward. A link pivots the barrel down and out of the locking recesses in the slide, and then comes into contact with the lower barrel lugs to stop the barrel from traveling more rearward. Meanwhile, the rest of the slide will continue to travel rearward to extract the spent shell casing and chamber a new round.

This design has been emulated numerous times in pistol design since its inception, examples being the Heckler & Koch USP and the Browning Hi-Power.  Throughout the 1911’s life, numerous upgrades have been made for the gun that are popular today. Examples include a longer frame mounted safety that is easier to actuate, a beavertail grip safety to reduce the chances of slide bite, front cocking serrations, and a Magwell to facilitate faster reloads.

Why Is The 1911 So Successful? There are many reasons the 1911 remains one of the most popular and successful pistols a century since its introduction. The first is its inherent ergonomics. When you reach out your hand and imagine that you are holding a gun, the grip of the 1911 is shaped to be exactly what many people imagine.

Another big benefit to the 1911 is the very slim and narrow design, thanks in large part to the single stack magazine. This makes the 1911 surprisingly easy to conceal inside the waistband, and it becomes even more concealable if you switch to a smaller Commander or Defender model. Another big benefit to the 1911 is the crisp and light single action only trigger. 1911 triggers in general are well known for being among the best on the market.

Finally, the heavier weight of the 1911 pistol, thanks to its all steel construction, also reduces felt recoil from the big .45 ACP round, and makes faster follow up shots much easier.

Reputable Makes and Models of the 1911 If you are in the market for a new 1911, here are some of great options of makes and models that you can go with:

The Colt Mark IV Series 70 is one of the most traditional 1911 that you can go with, featuring the short trigger, arched mainspring housing, spur hammer, minimalist sights, and short frame and grip safeties. It’s available in blued and stainless steel and chambered in .45 ACP.
SIG SAUER 1911 SPARTAN 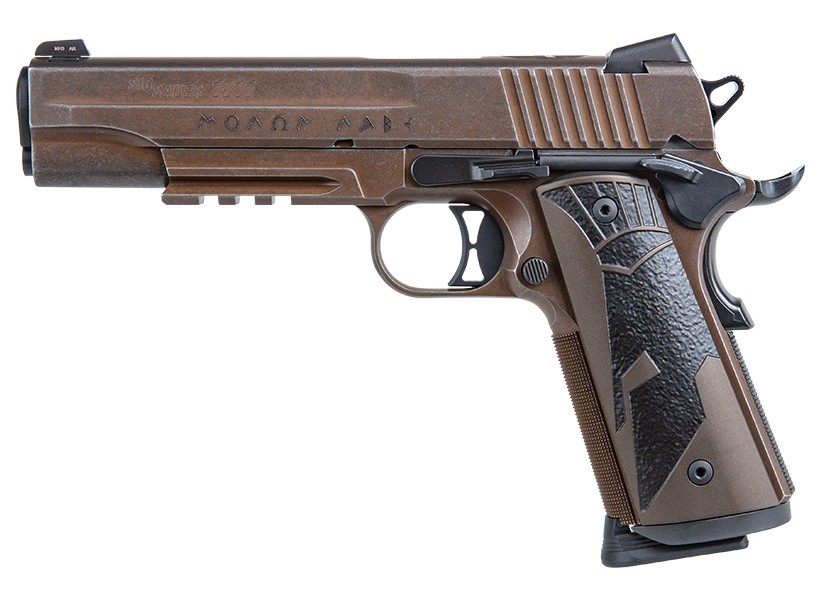 The SIG Sauer 1911 Spartan is one of the most modernized 1911 pistols in existence, and comes with a number of features including custom engraved aluminum grips featuring a Spartan helmet, ambidextrous thumb safety, beavertail grip safety, forward slide serrations, and a Magwell for faster reloads. 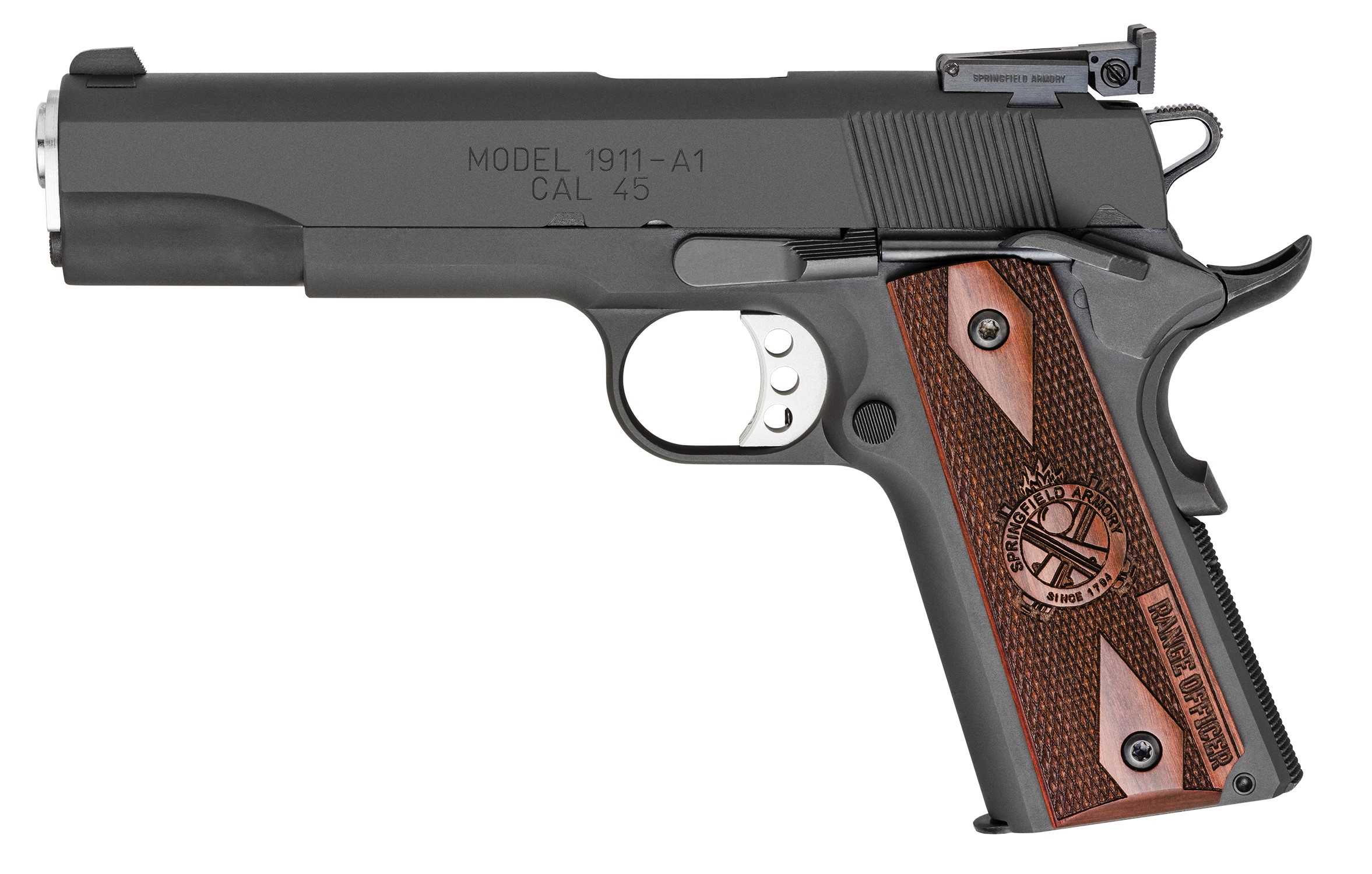 The Springfield Armory Range Officer is one of the best competition 1911s on the market. It features a black parkerized finish for superior rust resistance over standard bluing, adjustable target sights, extended beavertail grip safety to help prevent slide bite, and a flat mainspring housing and extended trigger.

Another high quality option from Springfield Armory is the Springfield TRP. It’s one of the more expensive 1911’s on the market, but if you can afford it the Springfield Armory TRP is a great model to go with. This 1911 features an accessory rail that runs underneath the entire frame, adjustable Tritium target sights, an extended beavertail grip safety, ambidextrous frame mounted safeties, Commander-style hammer, and G10 grips for “grippier” texturing in wet conditions. 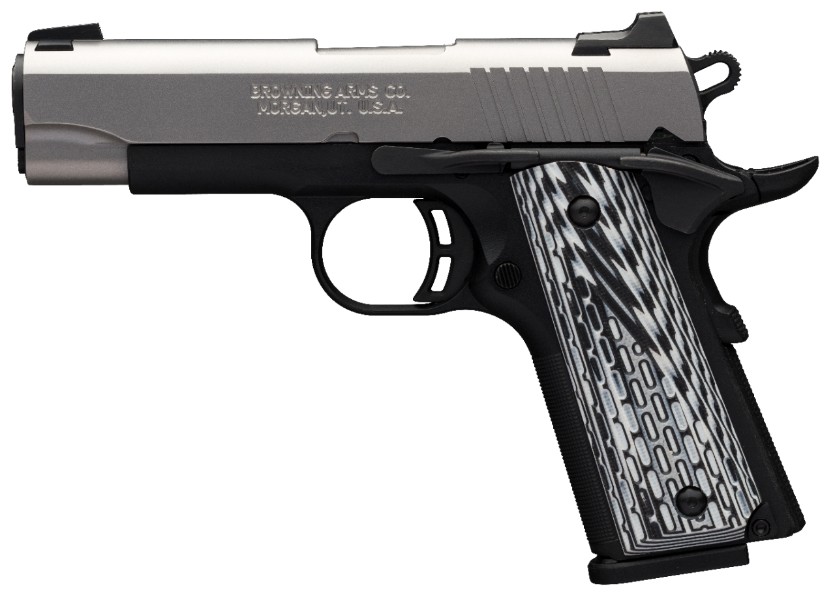 If you want a smaller and more concealable 1911 in a smaller caliber, you should consider the Browning 1911 chambered in .380 ACP. This is essentially a shrunk down 1911 but otherwise possesses all of the same controls and general outline as a full side model. 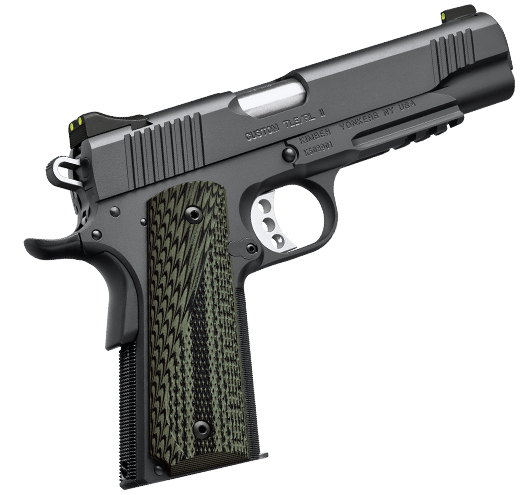 Regularly cited as being one of the best production pistols ever made, the Kimber Custom TLE II is built primarily for duty use and tactical applications. Designed with military and law enforcement use in mind, the TLE II features low profile three dot tritium night sights, front strap checkering, an integrated lanyard loop, and a match grade three hole trigger.

Newer DEFENSE AMMUNITION VS. TARGET AMMUNITION
Back to list
Older THE 1911 PISTOL – A CLOSER LOOK AT A LEGEND